June was a holiday month so I thought there’d be lots of reading but my holiday was a girls holiday so we were too busy having lots of hijinks for me to read too much. Plus, I had to read Riders for my book club and it’s a beast at over 900 pages, so that counts as two books. I’m definitely on track to read 50 books but I thought I’d be further along by now! Oh well, I guess life gets in the way – Anyway here’s June’s reads.

So You’ve Been Publicly Shamed by Jon Ronson

This book is about a couple wanting lose weight, so they enter a realty-show where they can win £50k. I will admit I’m obsessed by weight loss and body image (so weird, I know) so I thought this would be an easy beach read. However, it was so bad I couldn’t finish it. There were too many homophobic references and slurs for me to enjoy it. Oh well, sometimes you get a dud.

Call Me By Your Name by Andre Aciman

This was the perfect book to read on the beach in Italy (as that’s where it’s set. Aciman writes so evocatively, you can almost smell the apricots on the breeze and the salt of the sea. Recently the book was made into a film, so you’ll know the plot is about a young bisexual teen’s burgeoning sexuality – it’s a gay Lolita but way less problematic. This really is a gorgeous book and I enjoyed every minute of it.

This was set for my book club as recently we’ve been reading lots of heavy books about murder, rape, you name it. So a bit of Jilly was needed as a palate cleanser – and believe it or not, I’d never read any JC books before. At 900+ pages and with a cast of characters to rival any soap, Riders is a beast, but I enjoyed it so much. It’s hilarious, especially RCB’s off-colour quips. I even found the horsey stuff riveting and I will be reading sequel Rivals ASAP.

The Immortalists by Chloe Benjamin

I was really looking forward to this book, but it was totally different from what I expected. I thought it would be more… mystical. The story goes: four young siblings, one hot day in 60s New York, visit a medium who tells them the exact date of each of their deaths. The book then splits onto four parts, one for each sibling, in order of their death. I enjoyed Simon’s tale the most as it’s set in San Francisco around the time of Harvey Milk and the AIDs crisis. The premise is that is you knew the date of your death, how would you live your life? Or by being told a date would you inadvertently make it happen? Towards the end it all gets a bit heavy=handed but it was enjoyable nonetheless.

I was kindly sent this book and I think I finished it in two evenings. It’s fab. It’s pitched as The Secret History (great book) meets Patricia Highsmith, I would add a good dollop of Gossip Girl in there and Bret Easton Ellis. The book follows Louise who’s struggling to survive in New York; juggling three crap jobs, renting a shabby flat and watching her dream of being a writer wither. And then she meets socialite and it girl Lavinia. Lavinia invites Louise into circle, sharing drugs, clothes and men. Just how far will Louise go to keep hold of her new life? 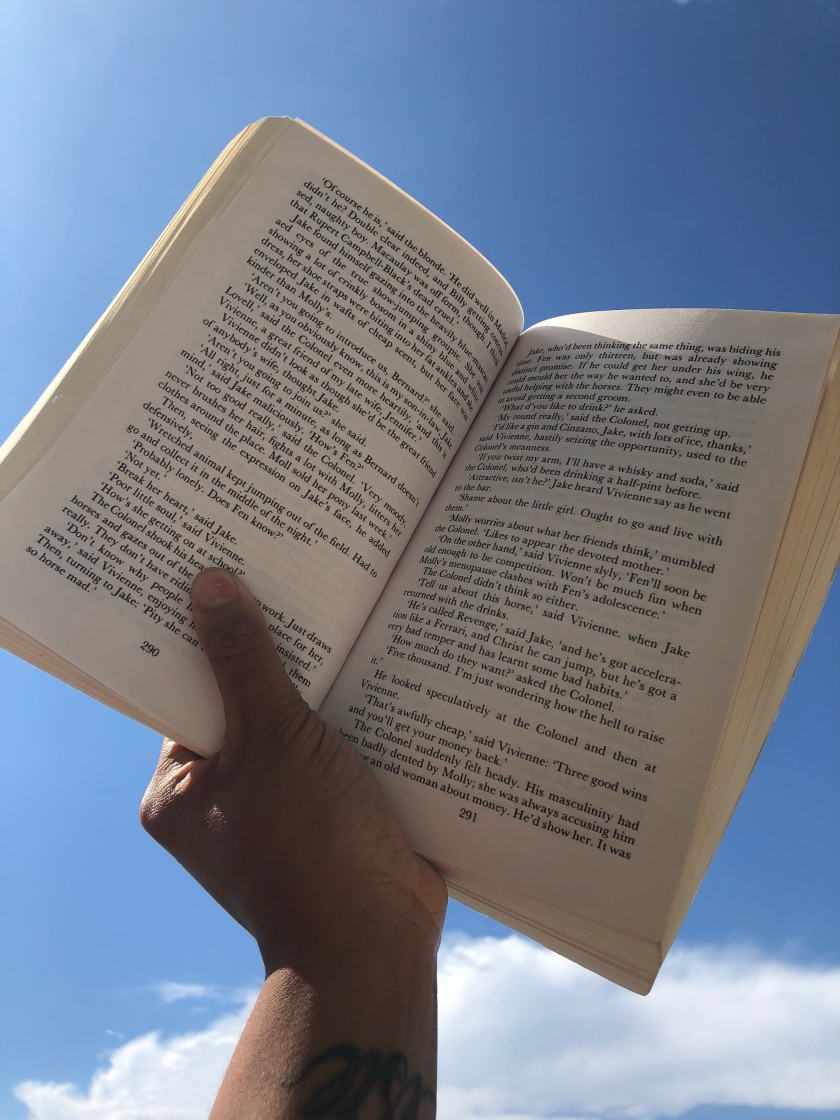 My Absolute Darling by Gabriel Tallent
The Girlfriend by Michelle Frances
Why I’m No Longer Talking To White People About Race by Reni Eddo-Lodge
Under The Sun by Lottie Moggach
Conversations With Friends by Sally Rooney
Dietland by Sarai Walker
Postcards from The Edge by Carrie Fisher
The Handmaid’s Tale by Margaret Atwood
The F Word by Liza Palmer
Silence by Natasha Preston
Red Clocks by Leni Zumas
Trying by Emily Phillips
How To Stop Time by Matt Haig
Bluebird, Bluebird by Attica Locke
The Most Dangerous Place on Earth by Lindsey Lee Johnson
Eleanor Oliphant is Completely Fine
Dead Girls by Abigail Tarttelin
I’ll Be Gone in The Dark by Michelle McNamara
Kismet by Luke Tredget
Sing, Unburied, Sing by Jesmyn Ward
The Pisces by Melissa Broder
Ponti by Sharlene Tao
In The Dark by Cara Hunter
So You’ve Been Publicly Shamed by Jon Ronson
Fat Chance by Nick Spalding
Call Me By Your Name by Andre Aciman
Riders by Jilly Cooper
The Immortalists by Chloe Benjamin
Social Creature by Tara Isabella Burton

📷 photo dump .
Lovely stay at @thestandardlondon ❤️ it’s suuuuper stylish. Mid-century modern vibes. I’m head over heels for the wood panelling and colourful tiles. Also, powder blue bathroom fixtures 🤤 I love getting #interiordesign inspo from hotels, do you? ❤️‍🔥 #interiorstyling #hoteldesign #thestandardhotel #midcenturymodern
🦪🌊🤍 A moment of appreciation for the @hm dress that I hunted down for weeks. .
M A R G A T E 💙 photodump. I’m so excited to move here. Every visit I like it more and more. Buying a house is a true test of patience but worth the wait. 🤍 Also, I definitely checked up on/ spied on my future pad. Still gorgey. 🤍 #firsttimehomebuyer #firsttimebuyers #margate #interiordesign #staycation #staycationuk
Wishing I had such a lovely view all the time. This Air BnB has a turret (is that the word?) and binoculars. Perfect for nosy beeyatches like me. So far I’ve spied a puppy-training class, two zaddies and a salsa troupe. 🌊 #margate #margatebeach
Found my dream home office situation- small and perfectly formed. 💡#wfh #homeofficedecor
This book is so inspiring. Usually with interiors books I’d just look at the photos, but @beataheuman has such a lovely ethos when it comes to home. Highly recommended. 🏠 #everyroomshouldsing
BEFORE & AFTER: HOME OFFICE 📝 This is a small room but one I spend a lot of time in so a refresh was in order. There was LOADS of stuff in this room (I forgot to take a pic before I emptied the shelves) so organisation was key to make it feel calm. I got loads of boxes from @dunelmuk in natural straw, cork and cord. Painted in a soft pink by @lick and transformed the desk with terrazzo by @jesrosevinyl which was SO easy to use. .
M A R G A T E 🌊 Some snaps from my last visit. Do you recognise any spots? .

Owning my own home was something I never thought was possible. As a fully paid-up member of generation rent I was fully of the belief that home ownership was...

Buying Your First Home as a Single Woman

📷 photo dump .
Lovely stay at @thestandardlondon ❤️ it’s suuuuper stylish. Mid-century modern vibes. I’m head over heels for the wood panelling and colourful tiles. Also, powder blue bathroom fixtures 🤤 I love getting #interiordesign inspo from hotels, do you? ❤️‍🔥 #interiorstyling #hoteldesign #thestandardhotel #midcenturymodern
🦪🌊🤍 A moment of appreciation for the @hm dress that I hunted down for weeks. .
M A R G A T E 💙 photodump. I’m so excited to move here. Every visit I like it more and more. Buying a house is a true test of patience but worth the wait. 🤍 Also, I definitely checked up on/ spied on my future pad. Still gorgey. 🤍 #firsttimehomebuyer #firsttimebuyers #margate #interiordesign #staycation #staycationuk